It has not been hard to figure out who to bet on to win the Super Bowl in recent years. The exact team may not have always been easy to pinpoint early in the season. But it was possible to narrow it down to half of the NFL’s 32 teams—the AFC.

For five of the last six seasons, the Super Bowl winner has been a team from the AFC. Oddsmakers had the AFC favored in four of the six and the NFC two.

But the one Super Bowl an NFC team won was a game in which the AFC was favored (Super Bowl LII).

So, if you were to place a bet on either of the AFC teams still alive in the playoffs, no one would blame you. However, heading into Conference Championship Weekend, an AFC team is not favored to win the Super Bowl.

Does that mean this could be the year for the NFC to win the Super Bowl? Is the AFC going to be knocked off its perch on top of the NFL? Or will it be just another year and another AFC win?

Who Will Play in Super Bowl LV?

Prior to the divisional round of the playoffs, most would have said probably not. As long as the Kansas City Chiefs have Patrick Mahomes, the Chiefs are the popular choice.

But then they lost Mahomes in the second half against the Cleveland Browns. 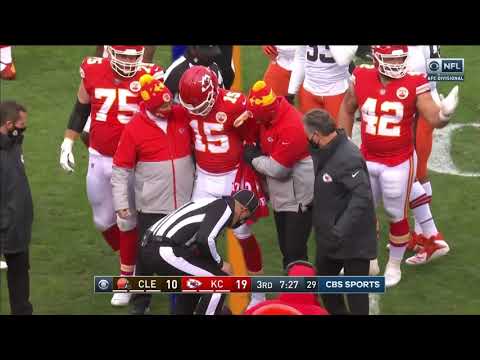 They were still able to beat the Browns without Mahomes guiding the offense. But his replacement (Chad Henne) is not why they won the game. His most notable play was the fourth-down conversion that allowed the Chiefs to ice the game.

His other two drives resulted in a field goal and interception. Against a team like the Buffalo Bills, that will not be good enough.

But it sounds like there is a good chance Mahomes will play in the AFC title game. That does not mean the Chiefs are a lock to win, of course. Josh Allen has been on fire with 19 touchdowns to three interceptions during Buffalo’s eight-game winning streak.

If both teams are at full strength, the AFC title game has the makings of a future classic. The question now becomes whether either remaining NFC team can beat whoever wins that contest.

When you consider who is playing in the NFC title game, it is not hard to say—maybe. In one team, you have the Green Bay Packers, the No. 1 seed, and the presumed MVP of the regular season, Aaron Rodgers.

But the other team, the Tampa Bay Buccaneers, is led by the GOAT of all GOATs, Tom Brady.

It may not have been a perfect regular season for Brady and the Buccaneers. But no one knows how to get the job down in the postseason quite like Tom Brady.

Rodgers and the Packers are favored by 3.5. But it is worth noting that the Buccaneers won the Week Six game between the two, 38-10. Neither quarterback was exceptional in that game; mistakes by Rodgers and the Tampa Bay defense decided the outcome.

Since that game, both quarterbacks have played well (especially Rodgers). Both had good games in the divisional round. But once again, Brady got a lot of help from his defense.

Betting Play: This one could easily go either way. But if you want to put money down on which conference the Super Bowl winner will come from, take the NFC.
According to BetMGM, the odds on an AFC team winning are -130. The odds for an NFC team winning are +110. So, if you are going to bet on this one, you might as well take the option that gives you a chance to win more money.

This is not an easier decision. It might be if it could be said with any certainty who will win the AFC and NFC Championship games. But both look like they will be excellent games that will go down to the wire.

To answer the question, we must decide whether one team from either conference would probably beat both teams from the other.

The answer there is a frustrating ‘maybe.’

Brady can never be overlooked or counted out. Rodgers has played phenomenal football in recent weeks and has been getting enough help from his skill position guys and defense.

With Patrick Mahomes running the offense, the Chiefs can beat any team on any given day. The same is true about Josh Allen and the talent-packed Bills roster.

Travis Pulver
Travis a native-Texan which is where his love of football originated. But after moving around a lot when he was younger, he was able to develop an appreciation for the game and not just his favorite teams. He now lives in Indiana with his wife, Nicole, and two kids, Jackson and Addison. You can find him on Twitter at @FatManWriting.