Shapovalov vs Khachanov is the first match on the schedule for quarterfinal Wednesday at Wimbledon. In what ended up being the most wide open quarter of the draw, these two players took advantage of the chaos that ensued. Now, they play for the right to presumably face Novak Djokovic in the semifinals. Here, we take a closer look at Shapovalov vs Khachanov and make our tennis picks for this contest. 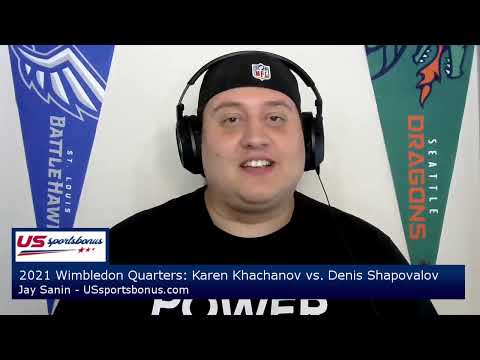 Denis Shapovalov went five sets with Phillip Kohlschreiber in the first round of Wimbledon. He then received a walkover victory over Pablo Andujar-Alba in round two before beating Andy Murray and Roberto Bautista-Agut in straight sets. Now, he will look to continue his run of good form with a spot in the semifinals on the line.

But it hasn’t been a flawless run for Shapovalov after the first round, thanks to his tendency to end up in trouble on his serve. The Canadian has faced 10 or more break points in all three of the matches that he has played during this Wimbledon campaign. And while Murray and Bautista-Agut may lack the power to take advantage of those moments at this stage of their careers, Khachanov has proven he is more than capable of closing out breaks.

Karen Khachanov has feasted on American competition thus far at Wimbledon. He defeated Mackenzie McDonald to start the tournament, beat Egor Gerasimov in straight sets in round two, then beat Frances Tiafoe in straights before surviving a five-set match against Sebastian Korda. The Korda match was one of the best of the tournament, as the Russian took the fifth set 10-8 to secure his place in the quarterfinals.

There were positives and negatives to the Korda match for Khachanov. On the bright side, he broke Korda 10 times in a five-set match, which is certainly impressive. But he also was broken nine times and made things much more difficult for himself than they needed to be, which is typical of Khachanov’s game at this point. He will need to take much better care of his serve to advance to the semis over Shapovalov.

Shapovalov vs Khachanov has been played just once previously, with Shapovalov taking that Davis Cup match by two sets to one. In that match, both players struggled mightily to protect their second serve points, with less than half of the combined second serve points in the match being won. Just like that match, this match figures to have plenty of chances for each player to earn break chances.

Picking a winner in this match is a difficult task, as both players lack consistency on serve. Instead, the over 39.5 service games play is a better choice as this match figures to go back and forth just like the first encounter between Shapovalov and Khachanov. Expect a roller coaster affair that should go at least four sets, with a fifth set being well within the realm of possibility.

What are Shapovalov’s odds of winning Wimbledon?

Shapovalov finds himself at 15/1 odds to win Wimbledon per DraftKings Sportsbook. Surprisingly, he is the fourth favorite to win the tournament entering the quarterfinals, though he would likely have to face Djokovic if he won this match.

What are Khachanov’s odds of winning Wimbledon?

Khachanov is the second biggest longshot to win Wimbledon heading into the quarters. He sits at 80/1 odds to win the tournament, with only Marton Fucsovics having worse odds to lift the trophy heading into Wednesday’s matches.

What is going to be the match of the day at Wimbledon?

The match of the day at Wimbledon could very well be this one, though Berrettini and Auger-Aliassime should put on a good show as well. Both matches feature some of the more exciting young talent in the sport, in matches that should be more competitive than the ones featuring Djokovic and Federer.