It’s that time of the year again! That’s right, March Madness is upon us so it’s time to get those March Madness predictions underway. We at US Sportsbonus love sports betting and are here to guide you through this amazing time.

Before we go any further, what is March Madness exactly? It’s the time period during March where the National Collegiate Athletic Association (NCAA) basketball tournament takes place. This single elimination event is a huge part of US sports and something followed worldwide.

No matter if you have followed the sport in the past or not, it is never too late to get started with betting on March Madness. We at US Sportsbonus are here to help you out by providing daily predications. Check in with us each day to get the latest news on this exciting NCAA tournament! 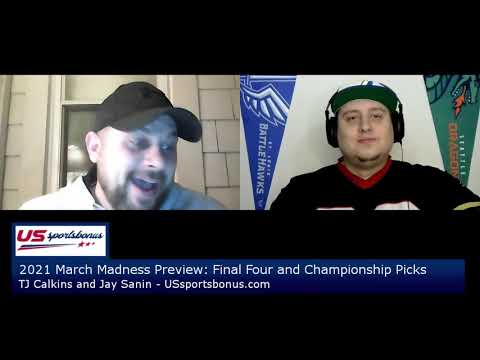 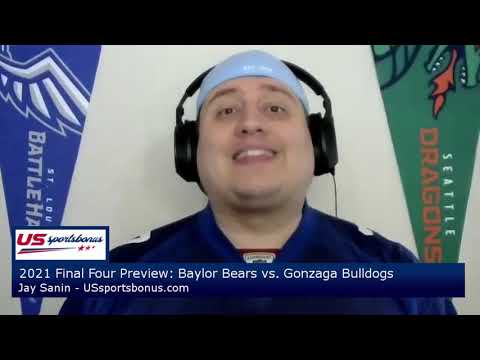 ✅ Baylor’s offense got the better of Houston’s defense, and the Cougars were not able to keep up. That drove this line down from an opening line of 5.5 to 4.5. The Zags will not have the same problems keeping up with the Baylor attack, and will outscore the Bears to claim their first national title.

As there’s a lot going on, we’re here to help players make the best NCAA tournament bracket picks. Combing our expertise from US SportsBonus, we’re able to give our players expert information on everything from the big ten tournament through to who we think will be the final four.

However, there’s no such thing as a certain bet. But, if you know your stuff when it comes to March Madness, then players may stand a chance at being more successful on a regular basis. It all comes down to tactics and knowing the setup of the 2021 NCAA tournament.

The structure of March Madness has changed over the years which is why it’s important to have a betting strategy in place.

There are 68 teams in total that will compete in the March Madness bracket and of these, thirty-two teams get picked automatically due to their being the champions in their regions. The other thirty-six are then researched by the NCAA committee with the best ones then selected to attend the NCAA tournament.

Once all the teams have been chosen, they are then split into four regions which are the March Madness bracket options. Each of these four brackets will contain 16 teams.

Within the tournament, and noticeable in this year’s 2021 March Madness, there are a number of different rounds. These are as follows:

The final point to understand here is the meaning of the term ‘strength of schedule’. In American sports, this is a term that refers to the difficulty a team’s opposing team is when compared to another one via their percentage wins in the NCAA tournament.

The higher the number a team receives, the stronger the schedule. However, sometimes this is also displayed as ranked within the teams and means that a lower number indicates the stronger schedule. As a major NCAA tournament tip, teams ranked from 6th to 15th generally have had more success in the last few years, something worth bearing in mind when taking on this 2021 NCAA tournament.

Tips for your NCAA Basketball picks

There are a couple of things players can think about before starting their betting journey on March Madness. These little tactics can help players have a better footing from the get-go. For instance, now you know that all the top ranked teams are kept apart from each other, listed in a separate bracket at the beginning of the tournament. choosing a number one ranked team to beat a team ranked 16 is a good place to start.

A popular betting method in other sports is to place bets on the underdog. However, when it comes to predictions in the NCAA tournament, things aren’t quite as simple as that. In fact, the top prize in this tournament is massive and the better teams are the ones to generally succeed.

Bet against the spread

One of our most recommended tips is to bet against the spread when betting on this college basketball event. It is a little more complex than some of the other betting options, but at the end of the day can payout quite handsomely.

As an example, for players choosing to bet on the favorite to cover the spread, then that team needs to win the game by more than than the points listed in the spread.

Bet on the over/under points total

Another betting option we suggest is to also bet on the over/under points total per game. It’s also possible to bet on a simple tournament winner or to simply stick with a preferred team throughout this college basketball tournament.

Here are some other betting options to consider when enjoying the fun that is this NCAA tournament.

The single game bet is the simplest one of all the bets. This means players can jump in and out of the action easily throughout the tournament. All players need to do is pick the winner of a single game. It doesn’t even matter what happens in the rest of the NCAA tournament, this bet is isolated.

For example, players could choose to place a bet on which team would win out of UC Santa Barbara and Wichita State from the West Region. It’s great because there’s no need to weigh up all the other factors of the tournament and just requires players to look at two teams.

This is a commonly placed bet, but it is harder to actually win. For players that have a good understanding of the game, or a good idea of the team forms, then this can be a good option.

It must be placed before the tournament kicks off though – and all that needs to be done is the player needs to predict which team, i.e. UC Santa Barbara, will win the whole event. A hard win, but the payout is worth it, though it’s recommended not to bet too big.

Finally, the hardest of the bets. This is bet is comprised of a full set of bracket predictions. Despite being hard, this option is the most commonly placed bet. This can be placed once the full bracket is released. Players will then need to place a bet on the outcome of each game right down to the winner of the tournament. These types of college basketball picks must be completed before the tournament starts.

The more correct picks made in the first round means players will get more chances to guess correctly in following rounds right through to the final four.

Moneyline bets are one of the easiest bet types. All this means is that a player is placing money on which team they will win the game. In contrast to this, betting on the point spread is wagering on who will win and by how much. Moneyline bets don’t need players to specify the difference in points, just who wins.

How the Odds and Bets Work

For players looking to place moneylines on March Madness, understanding exactly what this means is essential. When looking at the odds, the team that is favored to win will be listed with a minus (-) next to the name. The underdog will have a plus (+) next to their name. The side with the minus will pay less than the wager size compared to the plus side which will pay more.

With this in mind, players will need to consider the team form very carefully, before determining which of the teams to place the bet on. This is particularly important when it gets down to the final four and really, anything can go!

Odds for the first four and round one in this exciting 2021 NCAA tournament are already available. For players considering their bets, it’s now important to check out the odds across a range of different sportsbooks as these will vary somewhat, and it’s important to get the best odds.

While many players may go into this thinking they need to get the perfect bracket, the odds of achieving this are astronomical. So, it’s actually better to put this notion aside and concentrate on each game, finding the best odds along the way.

The only thing players really need to concentrate on is knowing which side is the favorite when it comes to the odds. As we outlined in moneyline bets, the favored team will have the minus (-) next to them.

However, for those who prefer to use fractional bets, the team with a lower number is the one expected to win. So if one of the final four is listed at 6/1 and another is at 20/1 then the 6/1 team is more likely to win. The lower the fraction, the greater the expectation is that the team will win.

However, it’s important to remember that odds are just predictions based on the previous form and anything can go on the day!

Over the years, March Madness has seen a number of winners. However, UCLA has the distinction of being the team to hold the most NCAA tournament titles with an impressive 11 under their belt.

Coming in just after them is the University of Kentucky with an also astounding 8 titles. North Carolina has 6 while Duke and Indiana both have 5. After this, the number goes down rather dramatically with many teams never having won at all.

Schools and colleges all actually benefit from March Madness too, even if they don’t get the prestige of actually winning it. On average, this NCAA tournament generates revenue of around $800 million a year, which is over 70% of the NCAA’s annual revenue. This money then flows nicely into the conferences and colleges throughout the country so that the sport can benefit. Better yet, this is a contingency plan for if the tournament gets canceled as it did in 2020.

But it’s not just about the teams when it comes to this much anticipated tournament. There’s also the punters too. Well, for players who manage their bets right, there’s a pretty impressive win to be collected, the amount will vary depending on the initial bet size.

However, there’s another option for March Madness winners too and that’s in the form of Warren Buffet’s March Madness bracket. Back again, this phenomenal offer sees the potential winner score a prize of $1 billion, but only for the perfect bracket.

However, all is not lost for he’s also offering a prize of $100,000 for the top 20 imperfect brackets as well. Bear in mind though, at this time, no one has ever got the perfect bracket in their March Madness predictions.

The March Madness schedule was up on 15th March. Each of the teams has been confirmed and the big ten tournament schedule is as follows:

In order to be in with a shot, players will need to follow this closely to know when to set their next bracket.