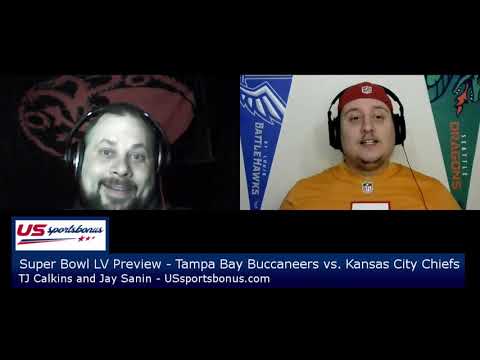 Chiefs vs Buccaneers Predictions: Chiefs -3 and over 56

Chiefs vs Buccaneers is an inter-conference matchup, with more on the line in this particular matchup. This game was already played once this season, but the second iteration this season happens to be in the Super Bowl. With everything on the line, this is the most important Chiefs vs Bills game we will see.

The Kansas City Chiefs defeated the Buffalo Bills and the Tampa Bay Buccaneers defeated the Green Bay Packers to earn the right to play in Super Bowl LV.

Super Bowl LV will feature the greatest of all time, Tom Brady, against Patrick Mahomes, the Super Bowl LIV MVP and the player who is currently playing the game at a higher level than it has ever been played. This game truly sets up to be one of the best of all time and one that will have no shortage of points scored.

Why bet the Chiefs and the over?

✅ Elite trio with even more help on the way: The Chiefs passing game is all about their elite of the elite trio of offensive skill position players. Patrick Mahomes and Travis Kelce have become the inarguable top players at quarterback and tight end in the league. Tyreek Hill is in the conversation for the top wide receiver in the league, but that is slightly more arguable.

In any event, attempting to stop the precision and ability to make any throw from Mahomes while these players are consistently open and chewing up yards is essentially an unfair task for any defensive unit.

Tyreek Hill is unquestionably the player to watch in the Super Bowl. He had a nice 269 receiving yards and three scores in the first matchup with the Buccaneers.

Additionally, Sammy Watkins is expected to be back for the Chiefs. Watkins brings more competence to the second wide receiver spot and he was a key part of the Chiefs Super Bowl win last season.

✅ Buccaneers schedule questions remain: It is not overly arguable that the Chiefs have had the tougher schedule and path to the Super Bowl, yet the Chiefs will end the season with the league’s best record, whether they win the Super Bowl or not.

✅ Buccaneers secondary won’t keep up: Patrick Mahomes threw for 462 yards and three scores in the first matchup, and the Chiefs will be able to move the ball at will.

The Buccaneers are stout against the run but have difficulties on the back end, and the Chiefs are one of the few teams or are the only team that has essentially no need to mix in a running game to keep their passing game humming.

While the Buccaneers will score points to be sure, they will not be able to keep pace with the Chiefs, who are the best bet to win the Super Bowl.

Where can you watch Kansas City Chiefs vs Tampa Bay Buccaneers?

You can tune into this game on CBS networks.

Where can you bet on Buccaneers vs Chiefs?

USsportsbonus.com recommends BetMGM Sportsbook to get the best odds and betting options on Tampa Bay Buccaneers vs Kansas City Chiefs in the Super Bowl.

Where do the Chiefs play their home games?

The Chiefs play their home games at Arrowhead Stadium in Kansas City, Missouri

Where do the Buccaneers play their home games?

The Buccaneers play their home games at Raymond James Stadium in Tampa, Florida

With no trend or even enough sample size to lean on history for this Buccaneers vs Chiefs Super Bowl matchup, we need to go with other factors for our predictions. With Tom Brady taking the reigns of the Bucs this season, historical splits prior to 2020 are right out the window.