Berrettini vs Auger-Aliassime may not have the name recognition of the matches featuring Roger Federer and Novak Djokovic in the quarterfinal round of Wimbledon. But the match may be the best one on the Wednesday schedule, as both players look to take advantage of a golden opportunity to reach a Grand Slam semifinal. In this round of tennis picks, we look at Berrettini vs Auger-Aliassime and offer our recommendation for a wager on the contest. 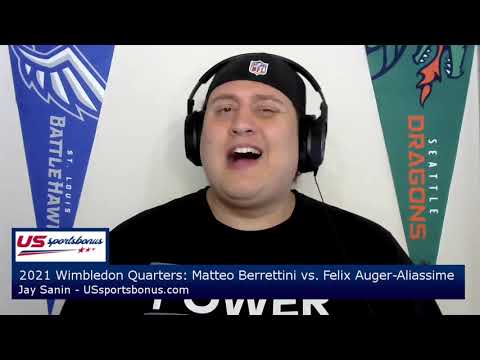 Matteo Berrettini dropped one set in the first round of Wimbledon, beating Guido Pella in four sets. Since then, Berrettini has not dropped a set, cruising through his next three opponents with ease. But it is the way that Berrettini has been playing that has been more impressive than the number of sets that he has won and lost during these championships.

During these four matches, Berrettini has served 67 aces, good for the top spot in the men’s draw. He has won 83% of his first serve points, good for fifth in the tournament, and 65% of his second serve points, which is top at this year’s Wimbledon. Unlike Sascha Zverev, who donated 20 double faults in the last round to Auger-Aliassime, Berrettini is going to protect his serve diligently.

Felix Auger-Aliassime has dropped plenty of sets throughout this Wimbledon campaign, but he has found a way out of any situation thus far. He hasn’t won a match in straight sets since the first round, with his last match being a thrilling five-set victory over the aforementioned Zverev. Auger-Aliassime won the first two sets of that match, dropped the third and fourth sets, but showed up when he had to in the fifth.

Auger-Aliassime has quietly put together a very impressive record on grass in his young career. In 2019 and 2021, the Canadian has gone 19-5 on this surface, a record that does come close to that of Berrettini over the same time period. But Auger-Aliassime has looked far less convincing during this tournament, as he has spent over an hour more on court despite getting a retirement from Nick Kyrgios after two sets in the third round.

Berrettini vs Auger-Aliassime has been contested just once previously, with the Italian taking the lone meeting in Stuttgart in 2019. That match also took place on grass, with Berrettini winning the match in straight sets. However, the second set did require a 13-11 tiebreak win by Berrettini to seal the match, with virtually nothing between the two in the second set.

Money has poured in on Berrettini for this match, as he opened at roughly -225 on the moneyline and is now closer to -360. The Italian has been virtually untouchable on grass and has the experience of beating Auger-Aliassime on the surface in his back pocket to boot. Expect Berrettini to put together another convincing performance here to win his quarter and set up a match with either Federer or Hurkacz in the semifinals.

What are Berrettini’s odds to win Wimbledon?

Matteo Berrettini is priced at 9/1 odds to win the tournament at DraftKings Sportsbook. That is the third best number in the competition, with Roger Federer and Novak Djokovic being priced ahead of him heading into the quarters.

What are Auger-Aliassime’s odds to win Wimbledon?

Felix Auger-Aliassime is 27/1 to win Wimbledon at DraftKings before the quarterfinals begin. He has arguably the toughest remaining path to the final, as he potentially has to beat Berrettini, Federer and Djokovic in a row to win the title.

Can anyone beat Djokovic for the title?

It really doesn’t look like anyone is going to beat Novak Djokovic for the Wimbledon championship. He is playing some incredible tennis right now, and has dropped just one set in this tournament, which he dropped in the first round. Expect him to keep rolling and for it to take a Herculean performance for him to fall.