Thursday Night Football this week spotlights the AFC West, as the Los Angeles Chargers take on the Las Vegas Raiders. With the Raiders’ hanging by a thread onto their playoff hopes, there are high stakes in this division matchup. And given the makeup of both teams, there is one betting angle that is especially enticing and worth adding to your NFL betting picks for the week. 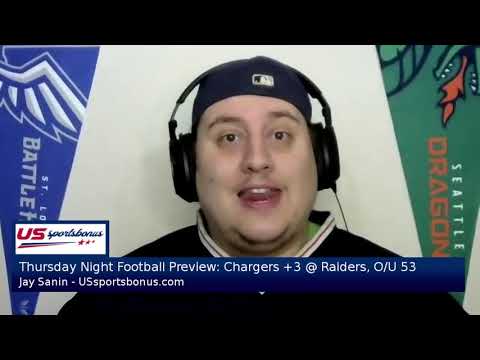 The Los Angeles Chargers defeated the Atlanta Falcons with a last-second field goal last week. Trailing 17-10 at halftime, the Chargers scored all 10 points recorded in the second half to come away with their fourth win of the season. The Bolts forced three Matt Ryan interceptions in the game, which helped them to get over the hump and break a two-game losing streak.

Heading into this game, the Chargers have the worst strength of victory of any team in the NFL outside of the winless New York Jets. Their four wins this season have come against the Bengals, Jets, Jaguars and Falcons, none of whom have close to a winning record. If they were to upset the Raiders in this game, it would be by far their most impressive accomplishment of the 2020 season.

The Las Vegas Raiders suffered a crushing defeat to the Indianapolis Colts last week. With both teams fighting for a wild card berth, the Raiders allowed 44 points thanks in large part to 150 rushing yards from Jonathan Taylor. As a result of that loss, the Raiders sit a game back of the seventh and final playoff spot in the AFC. Vegas’ 7-6 record puts them behind the 8-5 Dolphins and Ravens who are tied for seventh at the moment.

Jon Gruden’s team has allowed the third most points in the NFL this season. And their defense might be even worse this week, as four starters will be out against the Chargers. Defensive lineman Clelin Ferrell headlines that group, which includes two defensive backs as well. If the Raiders suffer a repeat of last week’s defensive performance, they may end the week out of the playoff hunt.

The Chargers and Raiders squared off earlier this season, with the Raiders winning a 31-26 ballgame. Despite only 13 pass completions from Derek Carr, the Raiders were able to hold off a Chargers team that gained 440 yards of total offense. Assuming Carr has a better game this time around, offense is likely to win the day again this time around.

In 13 games this season, the over has hit nine times in contests involving the Raiders. Justin Herbert and the Chargers have proven they can move the ball on the Vegas defense, with Raiders injuries poised to help them do so again. Rather than lay the points with a banged up Raiders team, the over appears to be the best play in what should be a fun game to watch on a Thursday night.

Are the Raiders going to make the playoffs?

Right now, the NFL betting market does not have faith in the Raiders to get to the playoffs. They sit at +440 to make the postseason heading into Week 15. Given that they would have to leapfrog the Dolphins and Ravens just to have a chance to get in, it would be tough to disagree with those odds. A win over the Chargers is a must for the Raiders to have a shot.

Is Anthony Lynn going to be fired?

Many think that Chargers coach Anthony Lynn should have already been fired. But after the conclusion of the regular season, conventional wisdom suggests that he will be dismissed as Chargers head coach. Lynn has been overmatched from a game management standpoint throughout his tenure with the Chargers, and the team would be better served with a coach more conducive to the development of Justin Herbert.

Is Jon Gruden a good coach?

It is hard to tell what to make of Jon Gruden’s tenure with the Raiders so far. It hasn’t been a complete disaster, but the Raiders were a playoff team before he got there and are failing to reach those same heights with him. He isn’t on the hot seat just yet, but another year without a playoff appearance could put him there in a hurry.