The New England Patriots and Los Angeles Rams met in Super Bowl LIII not too long ago. Today, though, both teams are locked into tense fights to make the playoffs. With four games left in the regular season, both teams have plenty to play for on Thursday Night Football. In this round of NFL betting picks, get set for this matchup between two of the best coaches in the league in Bill Belichick and Sean McVay. 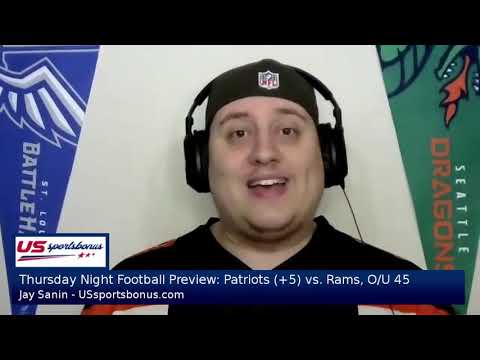 The New England Patriots played their most complete game of the season against the Los Angeles Chargers last week. Their 45-0 victory saw their defense render rookie of the year frontrunner Justin Herbert incapable of moving the football. Despite just 69 passing yards from Cam Newton, the Patriots found ways to score with their running game and special teams, which scored two touchdowns alone.

Unlike several teams that have had to play multiple games on the opposite coast from their home stadium, the Patriots were allowed to stay in Los Angeles between their two games at SoFi Stadium. Ironically enough, the Rams were made to travel back to Los Angeles after a game in Philadelphia before being made to fly to Buffalo before a game with the Bills earlier this season.

So far this season, the Patriots have yet to defeat a team that is currently in playoff position in either conference. New England’s best win of the season came against the Ravens, who are currently on the outside looking in. And that victory came during torrential rains. To put it lightly, there are questions about the quality of competition that the Patriots are capable of beating.

The Los Angeles Rams were criticized early this season for beating up on the lowly NFC East. But the Rams’ recent run of form has included three wins in four games against playoff-caliber competition. The Rams have beaten the Seattle Seahawks, Tampa Bay Buccaneers and Arizona Cardinals in the last month. A win over the Patriots would solidify their status as a playoff team in the NFC.

For the Rams, the key to their success has come on defense. While Jared Goff has been inconsistent this season, the Rams have been consistently great all year long. No team in the NFL is allowing fewer yards per play than the Rams, even in a division full of explosive offenses such as those in Seattle and Arizona. Against the Patriots, the defense will play a key role once again.

To have success against the Patriots, the blueprint is simple for Sean McVay’s team. If they can slow down the Patriots’ running game on early downs, and force Cam Newton to put the ball in the air in long yardage situations, the Rams should be able to get stops throughout the night. That is, of course, easier said than done. But the presence of Aaron Donald will surely help Los Angeles achieve that goal.

From talent and statistical viewpoints, the Rams are a much better team than the Patriots as currently constructed. On a short week against a Bill Belichick coached team, though, the value in this game is not in laying the points with the Rams. Instead, the under is going to be the play here as the Rams’ defense should make it a miserable night for Cam Newton even if Belichick’s defense can slow down Goff and the Rams’ offense.

Are the Patriots going to make the playoffs?

NFL betting odds currently have the Patriots at -770 to miss the playoffs. At 6-6, they would need to make up two games on multiple teams in the AFC in order to move into the top seven. With multiple playoff caliber teams still on the schedule, it is unlikely that the Patriots will be able to make up that kind of ground in just four weeks.

Are the Rams going to win the NFC West?

Coming into this week, the Rams are the favorites to win the NFC West. They are at -155 to take the division. But the Seattle Seahawks are still in the mix at +125 to win the West. The Rams currently lead the division thanks to a head to head tiebreaker between the two teams. But they are going to play once more before the regular season ends in what could be the deciding game.

What are Aaron Donald’s DPOY odds?

Aaron Donald is currently at +200 to win the Defensive Player of the Year award. He is the second favorite to win the award behind TJ Watt of the Pittsburgh Steelers. Watt is at +180 to win the award after he helped the Steelers win their first 11 games of this season. Those two players appear to be the frontrunners to take the trophy, with Myles Garrett also being on the short list of contenders.