Rublev vs Ruud is the second semifinal of the ATP Monte Carlo Masters. Just like the top half of the draw, this semifinal was expected to feature one of the greatest players of all-time. But with Rafael Nadal knocked out in the quarterfinals, another player has a chance to make a Masters 1000 final unexpectedly. In this round of tennis picks, we deliver our best bet for Rublev vs Ruud from Monte Carlo. 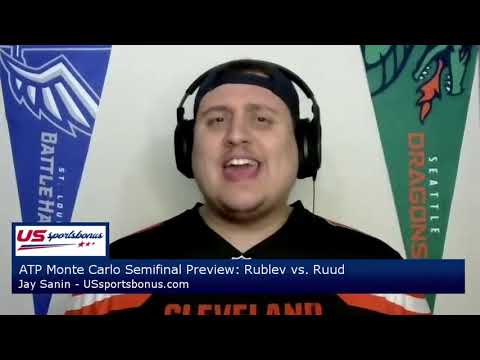 Andrey Rublev did something that not many men can say they’ve done in his last match. He beat Rafael Nadal on clay, taking a deciding third set rather convincingly to down the King of Clay on his best surface. Rublev will have to avoid an emotional letdown in the semifinal against Ruud if he wants to reach the final of this tournament.

Rublev was able to generate pressure against Nadal in a way that few players can on this surface. He broke Nadal seven times in three sets, against a player in Nadal who ranks second on tour over the last year with a hold rate of 86% in clay court contests. Against Ruud, who has shown a tendency to get into trouble this week, Rublev’s return of serve could be the weapon that decides this affair.

Casper Ruud has dropped just one set en route to the Monte Carlo semifinals. He has defeated Rune, Schwartzman and Fognini in straight sets, while needing three sets to get rid of Pablo Carreno-Busta. The Norwegian has played just one more set than Rublev to get to this point in the tournament despite playing one additional match this week.

The concern for Ruud heading into this match is what will happen if he continues to put himself in jeopardy on his own serve. He was broken first in the final set against Carreno-Busta and faced four break points in a first set service game against Fognini. He managed to overcome both of those situations that could have sent things sideways, but Rublev may not be as forgiving as Ruud’s previous two opponents.

Rublev vs Ruud has taken place in a competitive setting three times prior to Saturday’s semifinal. Rublev has won six of the seven sets contested, winning all three of those matches. Two of those contests have been played on clay, with Rublev winning once in straight sets and once in three sets. Ruud has never won two-thirds of his first serve points against Rublev, as the lack of free points he generates on his first serve has come back to haunt him.

When all is said and done, Andrey Rublev is going to come through this Rublev vs Ruud matchup in straight sets. He is putting outrageous amounts of pressure on his opponents of late, including a match in which he flipped the script on the ultimate generator of pressure in Nadal. Ruud will return the favor, but Rublev’s ability to set up easy points on his first serve more than his opponent will help him get through in two.

What happened to Nadal on Friday?

Rafael Nadal just could not handle the hitting of Andrey Rublev across three sets. Nadal is working his way back into full fitness before the French Open, which is his top priority. In this match, it was not enough for Nadal to be on the way back to full health. Instead, he was punished for being just a little less than his usual best, and it cost him a chance at the Monte Carlo crown.

Dan Evans is unlikely to beat Stefanos Tsitsipas in the other semifinal from the Monte Carlo Masters. Evans has really punched above his weight, so to speak, based on his previous record on clay prior to this week. But Tsitsipas has dominated Evans in their previous two matchups, and he should be able to repeat that feat with a chance to reach the final on the line.

Who is the French Open favorite?

Rafael Nadal sits at -125 to win the French Open in spite of the issues that are currently impacting him. Just how good a value that is depends on the kind of draw he gets before the tournament starts. But Nadal is very likely to be a heavy favorite in every match he plays en route to the French Open final. Given his history at Roland-Garros, there’s no argument to be made that he shouldn’t be a heavy favorite.