The Boston Celtics and Washington Wizards will face off in an Eastern Conference play-in battle that is sure to bring the fireworks. Both of these teams are looking to prove they are worthy of playing in the playoffs and will be able to prove it in an extremely important game here. Let’s dive into the NBA picks and how this one will go down and who will end up covering the spread. 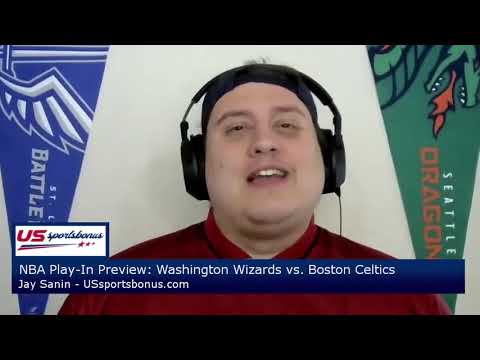 This game will take place at 9:00 PM ET in TD Garden

Why bet the Washington Wizards:

✅ The biggest key to the Wizards' recent success has been their health. Russell Westbrook and Bradley Beal are both back on the floor and playing at a high level for the Wizards. The Celtics, meanwhile, are without Jaylen Brown who is done for the year with a wrist injury. That leaves Boston to rely on Jayson Tatum and the inconsistent Kemba Walker in this huge spot.

✅ The injury to Jaylen Brown is going to force Jayson Tatum to assume a disproportionately large role in the Celtics' offense. Tatum is a very good player, but hasn't proven that he can carry a team in the postseason just yet. Against a Wizards team that can put up points in huge numbers, expect his efforts to fall just short.

✅ Believe it or not, the Washington Wizards are one of the best teams in the league at covering the spread on the road. They are 22-13-1 against the spread away from home this season, with that 62.9% mark being good for fourth in the NBA during the 2020-2021 campaign. That is going to be a problem for the Boston Celtics, who are a sub-.500 team against the spread at home this year.

Where do the Boston Celtics play their home games?

The Celtics play their home games in TD Garden.

Where do the Washington Wizards play their home games?

The Wizards play their home games in Capital One Arena.

Where can you watch Wizards vs Celtics?

You can watch this game nationally on NBA League Pass.

Where can you bet on Celtics vs Wizards?

USsportsbonus recommends BetMGM Sportsbook to get the best odds and betting options on the game.

The Boston Celtics and Washington Wizards are two Eastern Conference teams with plenty of history. Dating back to 1961, the Boston Celtics and Washington Wizards have faced off over 300 times with the Celtics holding a solid advantage. They’ve won close to 65% of the head to heads, which makes sense when you consider the many historic Celtic teams of the past.

With that being said, they’ve also played 22 times in the playoffs and things have been a bit more even. The Celtics have walked away with three victories to one loss, but each series was close and 13-9 is relatively close all-time.

Washington Wizards vs Boston Celtics Against the Spread Predictions

When making a wager against the spread, you must decide whether the Boston Celtics or Washington Wizards will win the game and by how many points. This is the most popular way to wager on NBA games as you’re able to draw even money on both sides of the bet. This can seem like a daunting task at first look, but that’s what we are here for.

For example, let’s say the Boston Celtics are favored by 3.5 points over the Washington Wizards in TD Garden. In this case, a bet on the Celtics would call for a victory by four or more points while a wager on the Wizards would require either a victory by any margin or a loss by three or fewer points.

Remember, it’s extremely important to consider every factory when making a Celtics vs Wizards against the spread bet. Those include any recent injuries and whether one team is more fatigued than the other. Make sure to check out the Washington Wizards vs Boston Celtics against the spread predictions above as we will let you know which side of things to be on.

Betting the over/under in general comes down to picking whetehr two teams will combine for more or less than a certain amount of points. Instead of rooting for a certain team, betting the over/under allows you to solely root for either offense or defense. This is the second-most popular way to bet on NBA games and another way to get even money on both teams.

Using the same hypothetical as above, let’s assume the Celtics vs Wizards over/under is set 225.5. A wager on the over would call for 226 or more points to be scored while a bet on the under would ask for 225 or fewer total points scored. This is another bet where you must consider even the slightest of factors.

The most important factor to consider when making a wager on the over/under is the PACE, which tells you how fast a team likes to play. This will give you a strong indication of just how fast the game should be played. Make sure to check out the Wizards vs Celtics over/under betting predictions above.

If you’re not looking to make a wager on the over/under or spread, you can make a relatively simple bet on the moneyline. This comes down to simply picking the outright winner of the game, allowing you to ignore both the spread and total. This is the third most popular way to wager on NBA regular season games and the way a lot of casuals like to go.

Opposed to both the spread and total, you cannot get even odds on both sides of the moneyline. This is how the sportsbook make their money on this wager, forcing you to pay juice on the favorite and giving you a bonus to bet the underdog.

The Boston Celtics and Washington Wizards are both solid teams in the East and this is a team that either team can win. Make sure to check out the Celtics vs Wizards moneyline predictions above as we will let you know which team we believe will win the game.

The NBA has a ton of late-breaking news and it’s no accident that the odds continue to change up to game-time more than any other sport. There are many times that there is unknown info just 30 minutes prior to tip-off, leading to massive line movement when the news finally does break. This doesn’t always happen, but the NBA certainly has more line movement than any other popular sport in the US.

It’s also extremely important to consider line movement when placing your wagers. If you think the line moves in your favor, it can be invaluable to wait for that movement. It can and has been the difference between a winning and losing bet many times just this season. Check out the Washington Wizards vs Boston Celtics odds and predictions above.

The United States currently doesn’t offer any live streaming options when it comes to the NBA and sportsbooks. With that being said, the possibilities will soon open up as the legal landscape of sports betting in the states grows in popularity. We will be the first ones to let you know when things do change, so don’t feel the need to look elsewhere.

For now, you have a couple of different options when it comes to live streaming Celtics vs Wizards. The easiest of which is the NBA League Pass, which will give you direct access to every game throughout the NBA. You can also access a paid streaming site, which will give you for more than just basketball to watch. The best of which include YoutubeTV, FuboTV, and Hulu.