Welcome back for the 16th installment of UFC Vegas betting plays. This Fight Night like the previous Vegas cards takes place at the UFC Apex and, a reminder, takes place in the smaller Octagon.

When calculating wagers on this card, put at least some level of weight on the fighters that will benefit from increased engagement and grappling. It is easy to forget that is the case after so many cards at the venue, just putting a reminder out there on that aspect.

We don’t have household names on this card but it is solid matchmaking overall. The card should be entertaining, particularly if you’re a fan of grappling, as we could realistically see some level of wrestling and grappling in every single fight. We will have fight dedicated plays, and as on all UFC Picks, a prediction for every fight on the card.

Let’s get to the plays, first in video and then in text below. 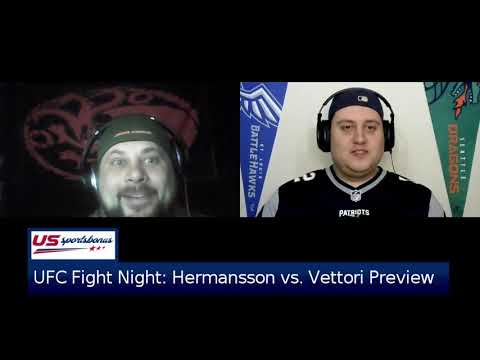 From the time this main event was announced, including early on in the week, I thought this fight was razor thin and was thinking a pick em betting line would be appropriate.

As the week progressed and after playing out iterations of this matchup, I slowly but surely started leaning to one side. If that lean was to the favored side of Marvin Vettori, I still would have passed on this fight and not made it a dedicated play, but the lean is to Hermansson and the plus figure that comes with him.

Vettori does have areas of advantage in this fight. He is the physically stronger fighter, he is the more technically sound striker and he is the better wrestler. All of these edges exist, but none are ones that are wide advantages by any means. Hermansson has edges of his own, and I think his areas of strength and advantage in this fight are the ones that will be the more important and ultimately decide the fight.

In the stand up, Hermansson tries to use unpredictable movement and is unorthodox, but as mentioned, will still be at a slight disadvantage. The worry in this department is mitigated however, as Hermansson has had struggles with high end fighters with dynamic power. Vettori is not one of those fighters, and like Hermansson, doesn’t have one shot fight ending ability in the standup.

Cardio could play a huge role in this fight, as it is questionable whether Vettori can stand up to the demands of a 25 minute high paced fight. Hermansson has done it and should have the edge in the championship rounds in that department. This brings us to the largest edge of either fighter in this matchup, and that is Hermansson’s ground game. He has owned BJJ black belts in the octagon over the last three years, and by my count has five wins in such fights, including four finishes and three submissions.

Vettori is not helpless while grappling, but he will not have an answer for the top game of Hermansson if his wrestling fails him. Hermansson is very live for a finish on the floor, but also if Vettori decides to wrestle. Hermansson has one helluva guillotine and Vettori will want to mind where he places his neck.

All in all, even if Vettori is able to keep the fight upright early, I think his cardio fading later will keep that game plan from continuing, and the fight gets to the mat at some point. This will lead to a Hermansson decision or late finish on the floor.