✅ Medvedev has won four straight sets after dropping the first set of his Toronto campaign to Alexander Bublik.

✅ Hubert Hurkacz really struggled to get by Nikoloz Basilashvili despite Basilashvili only making 39% of his first serves.

✅ Medvedev is looking to avenge his rather fluky loss to Hurkacz at Wimbledon which was aided by a rain delay that derailed the Russian's momentum.
Bet now
promo code
CLICK HERE

Medvedev vs Hurkacz is going to kick off the night session at the ATP Toronto Masters. This match is a rematch of one of the best clashes from this year’s Wimbledon, when Hurkacz was able to come back from multiple deficits to win in five sets. In this edition of ATP tennis picks, we look at the second Medvedev vs Hurkacz encounter in about a month, and pick a best bet in this quarterfinal clash. 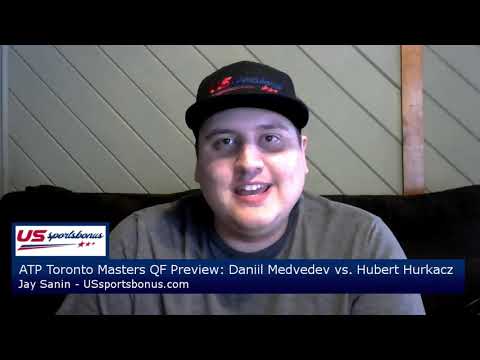 Daniil Medvedev dropped the first set of his campaign in Toronto against Alexander Bublik, but has won the four sets that followed to roll into the quarterfinals. The Russian took care of James Duckworth in straight sets after coming back to beat Bublik, and he appears to be back on track heading into this rematch with Hurkacz. As usual, the defensive tennis of Medvedev is going to be what decides this match.

In each of his first two matches in Toronto, Medvedev has won over half of the second serve points from his opponents. He did the same against Hurkacz in their Wimbledon clash, with the rain allowing Hurkacz to regroup in a match he was trailing in at the All England Club. In this match, assuming no weather issues, Medvedev should be able to avenge his Wimbledon defeat to the Polish number one.

Hubert Hurkacz has made the quarterfinals of another Masters 1000, and is looking to win his second tournament of this magnitude for the season. He defeated Nikoloz Basilashvili in the round of 16 after a first round bye and a walkover against Kei Nishikori got him to that point. But Hurkacz’s level of play was up and down against Basilashvili, as Hurkacz had to grind out some difficult service holds in the third set to defeat the Georgian.

Hurkacz also benefited immensely from Basilashvili’s struggles with his serve in the round of 16. Basilashvili got just 39% of his first serves in play last night, something that Medvedev won’t allow to happen in the quarterfinals. Against one of the best defensive tennis players on tour in Medvedev, Hurkacz won’t be likely to match the 22 aces he got against Basilashvili either.

The only Medvedev vs Hurkacz match prior to this one was their meeting at Wimbledon, where Hurkacz was riding high after beating Roger Federer. Here, Hurkacz hasn’t built the same momentum, struggling in the Olympic tournament and looking extremely vulnerable against Basilashvili. In this match, Medvedev’s defense is going to make things difficult on Hurkacz, as Medvedev should get through in straight sets on his favorite surface.

What are the current odds to win Toronto?

The favorite to win the Toronto Masters heading into the quarterfinals is Medvedev, who is at +130 to win the tournament at FanDuel Sportsbook. Stefanos Tsitsipas is second on the list of favorites at +260, with Roberto Bautista-Agut in third at +750.

Is this the best match of the quarterfinals?

The best match of the quarterfinals could be the one between Reilly Opelka and Roberto Bautista-Agut. In addition to having the tightest odds between the two players of any match in this round, both players have such different styles of play that the match is a must-watch.

Who is the best semifinal matchup for the winner of this match?

The best matchup in the semifinals for these players would have to be Gael Monfils. John Isner’s serve on hard courts is so difficult to return, while Monfils’ relative inconsistency can make him exploitable. This is especially true for Medvedev, who would make Monfils grind out rallies from the baseline.