The Ten Greatest Tennis Upsets of All Time

Is there anything better than when something remarkable happens that etches into the history books and is never forgotten. Grand Slam tournaments in tennis tend to follow a somewhat predictable pattern with few major upsets. In this article, we have put together a top ten list of what we think are the biggest tennis upsets of all time. 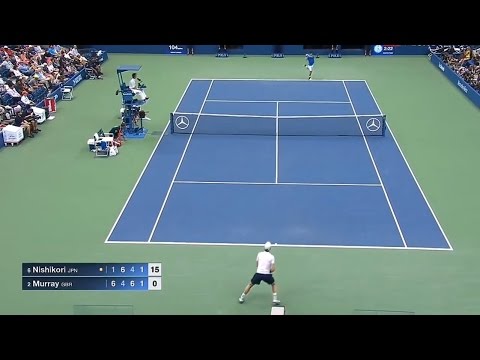 Many might wonder how this makes it into our top ten list of biggest upsets of all time, Nishikori entered the tournament as the #7 seed and was clearly considered as one of the potential winners. BUT this was the time when Murray was just about to peak and in 2016 he was the player to beat. Entering the event as the #2 seed and in November the same year, he topped the ATP tour rankings for the first time in his career.

Murray entered the US Open 2016 as a favorite together with Djokovic. This was the year they were going to battle it out on the Arthur Ashe stadium for the last grand slam trophy of the year.

Murray crushed his opponents in his first four matches and only lost one set in the 3rd round against Lorenzi (which was a very sloppy and poorly played set from Murray).

The quarterfinal started according to plan with an easy 6-1 first set in Murray’s favor. Nishikori took the second but Murray snatched the third and at that time we all thought Murray was going to walk away with a 3-1 set win but Nishikori (US Open finalist in 2014) had other things in mind and started to play on another level and turned up the tempo to a speed in which even Murray could not handle. The fourth set was a pure master class display from Kei and in the fifth set could have gone either way. 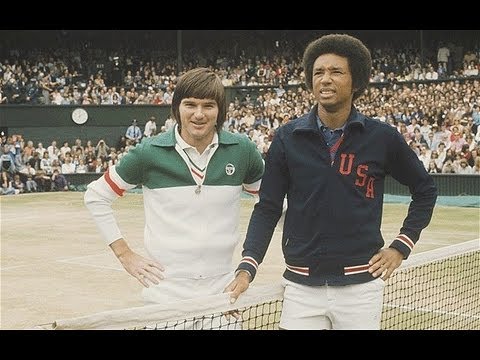 Connors was the reigning champion, entering the Wimbledon 1975 final boosted with confidence after cruising to the final. With 3 grand slam wins in the bag in 1974, 1975 was planned to be another year with complete dominance of the aggressive playing American. After falling short in the Australian Open and French Open, Connors was back on track in Wimbledon and Arthur Ashe was supposed to be an easy opponent in the final.

Arthur Ashe who was seeded sixth in the championship was a two-time Grand slam winner (US Open 1968 & Australian Open 1970) had never been reached a final in the Wimbledon before and his glory days were considered to be over. Wimbledon was the turn-around and in 1976 he reclaimed the top spot on the world ranking, a position he previously held in 1968.

Not only did Ashe win the match, but he also crushed Connors. 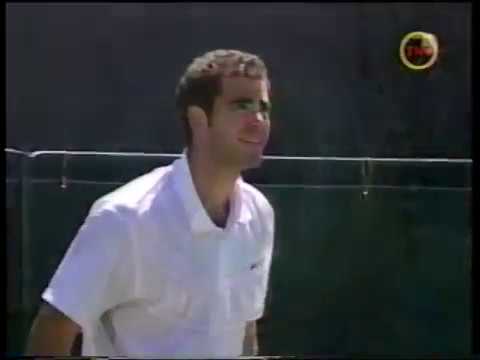 George Bastl from Switzerland made it to the newspaper covers after knocking out Pete Sampras, the king of Wimbledon in the 2nd round. Bastl who never passed the 2nd round before or after in a Grand Slam event chocked the world on this day. Bastl entered the Wimbledon for the first time in 2002 as a lucky loser which makes this upset even bigger.

Sampras with 7 Wimbledon trophies with the latest win from 2000 and entered the 2002 championship as one of the favorites eventually lost in 5 sets. Sampras later retired from professional tennis that very same year. 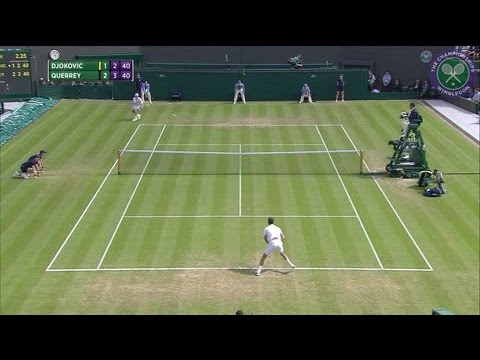 One of the best servers, Querrey, facing who is arguably the best ever returner of the game Djokovic sounds like an easy prediction. Most bets were on Djokovic in 3 straight sets but this day Querrey served out of this world and upped the rest of his game to heights that we have never seen him reach again.

Djokovic did not stand a chance in returning Querrey’s serves. I don’t think I’ve ever seen anyone play a better set against Djokovic than Querrey did in the second set, 6-1.

Djokovic did not manage to turn the match around and could not repeat his success from 2014 and 2015 to win his 3rd consecutive Wimbledon. 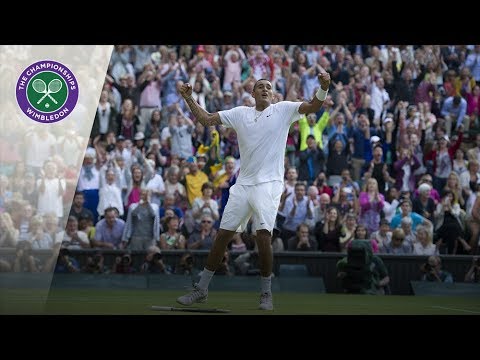 This was the day when 19-year-old Nick Kyrgios made a real name for himself. 2014 was his second year on the ATP tour and the first Grand Slam where he did not have to qualify to enter the main draw.

Nadal with 2 titles in the baggage (2008 and 2010) was aiming for his 3rd French open Wimbledon double but the young Aussie had other things in mind for this day.

This match was also the start of a frosty relationship between the two players. Kyrgios who plays extremely fast has over time criticized Nadal for slowing down the tempo and use it in his favor.

Kyrgios came out swinging and serving aggressively (on both first and second serves) and Nadal was clearly disturbed and could not find his rhythm. No win over Nadal comes easy and this was no exception but Kyrgios proved to the world of tennis that he is a force to be counted with. 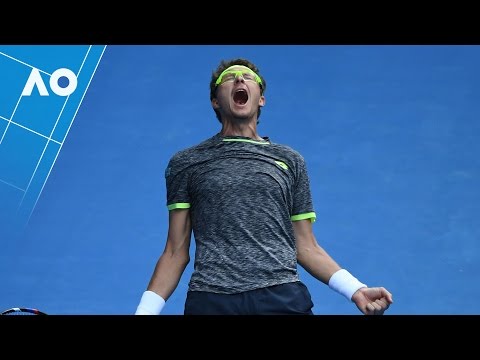 Moving into 2017 Djokovic was planning to continue his Grand Slam dominance and win his third straight Australian Open title.

Denis Istomin, a player who never had any success in the Grand Slams and who peaked a few years earlier reaching 33rd on the world ranking is not a player who should be a threat to someone like Djokovic.

Obviously, Istomin played one of his best matches ever but Djokovic was not the be recognized and the 2nd round AO loss was the start of what was going to be a 0 win grand slam record for the world number one. 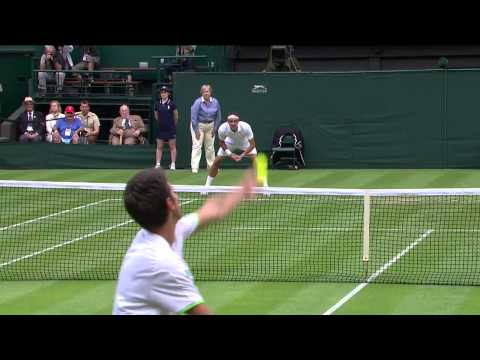 Federer, the reigning champion and a 7-time title holder started according to plan, winning the first set against Ukrainian Sergiy Stakhovsky but that was about as much fun the Swiss megastar would have on this day.

Federer struggled to return Stakhokvskys server through-out the whole match and underperformed on some crucial points. Stakhovsky probably played one of his best matches in his career and with his flat groundstrokes, a hard to read server(at least for Federer) and a deep slice, his game is perfect on the grass.

Stakhovsky did not manage to follow up the biggest win of his career and lost to Austrian Jurgen Melzer in the following round.

Federer had to wait 4 more years before he could cash in his 8th title in 2017. 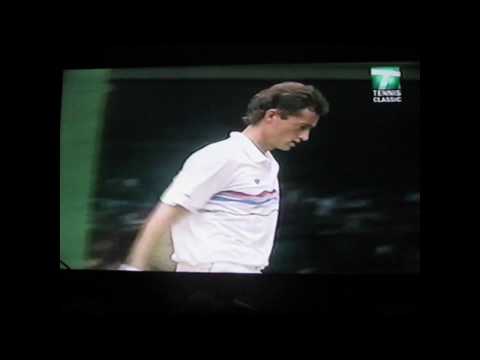 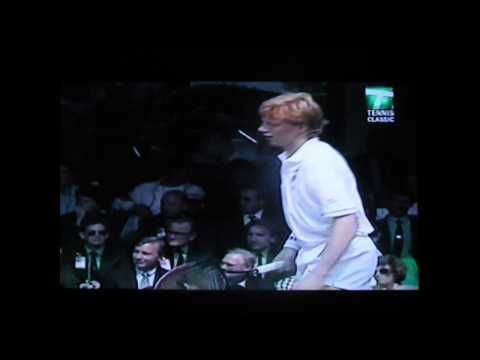 Becker entered the tournament as the odds favorite and with two previous titles under his belt (1985 and 1986).

Peter Doohan (who tragically died at 56, 9 weeks after being diagnosed with motor neuron disease) played his 4th Wimbledon with three first-round exits. His fourth appearance would end in 3 match wins.

Facing the reigning champion, Becker in the 2nd round Peter Doohan was going to be a piece of cake for the charismatic german but Doohan had another plan. Reportedly, Becker had relationship problems at the time with his current girlfriend but nonetheless, Doohan was the better player and deserved the win.

Sampras, the king of Wimbledon had won the event in 1993, 1994, and 1995 and was at this time considered as almost unbeatable on the grass. In 1996 he would fall to the Wimbledon winner which certainly proves that Krajicek was in very good form throughout the whole tournament. Sampras recovered and later won the Wimbledon on 4 more occasions – 1997-2000.

Richard Krajicek (my childhood favorite player) won the final against Malivai Washington in what is the first and only Grand Slam tournament between two unseeded players. Krajicek was ranked #17 in the world and was at first unseeded until Thomas Muster withdrew from the tournament.

What makes this the largest upset in Wimbledon of all time? Krajicek was a great grass-court player with a big serve, great volley, and powerful groundstrokes. By the description, it sounds like a player who could beat anyone on a good day but, not to be forgotten, Sampras lost ONE!!! match in Wimbledon between 1993 and 2000 (8 tournaments). Not only did he lose, but he also lost in three straight sets and stood no chance. 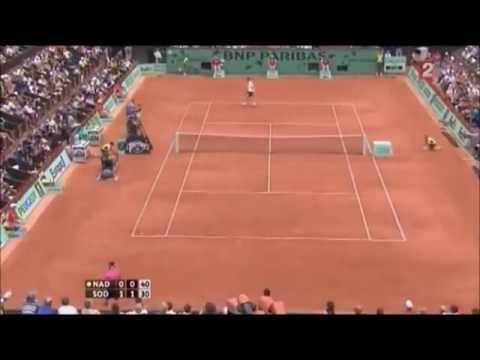 The King of Clay had and still has a clay court record never seen before. He was unbeatable, could not be done and honestly, most players had given up the thought about this every happening. Just looking at Rafa Nadal’s French Open record is enough. No further explanation needed on how big of an upset Robin Söderlings win was.