Djokovic vs Shapovalov is the marquee matchup of the Wimbledon semifinals, as the world’s number one tries to make another Grand Slam final. To do so, he will have to hold off a player in Shapovalov who has played very well throughout this fortnight. In our latest tennis betting predictions, we take a closer look at Djokovic vs Shapovalov and offer our best bet for another semifinal featuring Novak Djokovic. 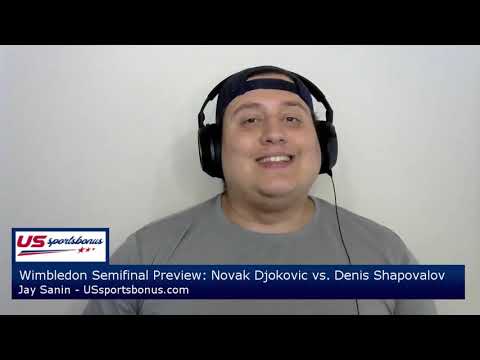 Novak Djokovic has played some of his best tennis over the last couple of weeks, dropping just one set to get to the Wimbledon semifinals. Djokovic has had a relatively easy draw en route to this round of the competition, but he has proven over many years that he is dominant at this event regardless of who is on the opposite side of the net. In the last round, he made quick work of Marton Fucsovics, taking the Hungarian down in straight sets.

Djokovic has won 86% of his first serve points so far in this tournament, good for number one in the entire tournament. If Shapovalov is going to make a dent in the Djokovic serve, it is going to have to come on second serves, where Djokovic has won 57% of his points and ranks 18th in the Wimbledon field. But with the defense of Djokovic likely to cause plenty of Shapovalov errors, it remains to be seen if the Canadian can take advantage of a second serve that has appeared weaker than the first.

Denis Shapovalov has won his matches either in straight sets or five sets during this tournament. He survived Phillip Kohlschreiber in round one, won two matches in straight sets, then beat Karen Khachanov in five sets to advance to the semifinals. In the Khachanov match, Shapovalov showed great resolve, coming back from two sets to one down to down the Russian and set up this match with the top player on the planet.

For Shapovalov, the key to this match will be how well he can avoid getting antsy in the face of Djokovic’s stifling defense. The ability of Djokovic to regularly get balls back to his opponent can force them to overplay shots and pour in errors, something Shapovalov struggles with even when not facing elite talent. For a player in Shapovalov who had 10 double faults and over 40 unforced errors in the quarters against Khachanov, any additional impetus to overplay could be fatal to his chances.

This is just a bad matchup for Denis Shapovalov, as his game style lends itself to being picked apart by a player in Djokovic who picks everyone apart. Expect Djokovic to use his devastating return game to force error after error from Shapovalov, en route to a straight sets victory and another Wimbledon final appearance.

What are Djokovic’s odds to win Wimbledon?

Novak Djokovic is a heavy favorite to win Wimbledon entering the semifinals. He is at -360 to win the tournament at DraftKings Sportsbook.

What are Shapovalov’s odds to win Wimbledon?

Denis Shapovalov is at 13/1 to win the final two rounds of Wimbledon, per DraftKings. Only Hubert Hurkacz has longer odds to lift the trophy entering the semis.

Who is going to win Berrettini vs Hurkacz?

Matteo Berrettini would be the best choice to win Wimbledon. Though Hurkacz has been incredibly impressive, especially in beating Roger Federer in straight sets, Berrettini has been lights out on this surface and should get to the final.